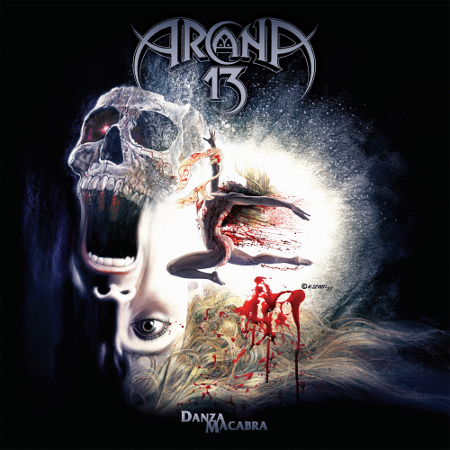 The sensational visualization has been created by a true Italian horror icon: the legendary artist ENZO SCIOTTI.
In over 50 years of career Enzo Sciotti illustrated more than 3000 movie posters, including cult horror masterpieces like Lucio Fulci’s death trilogy “The Beyond”, “City of the Living Dead” and “The House by the Cemetery”; Dario Argento’s “Phenomena”; Sam Raimi’s “Army of Darkness” and “Evil Dead”; Joe D’Amato’s “Antropophagus”; Lamberto Bava’s “Demoni”; Stephen King’s “Maximum Overdrive”.

For ARCANA 13 Enzo Sciotti managed to revive the golden age of Italian horror and went beyond his limits bringing to canvas DANZA MACABRA’s cover. He commented: “This is my masterpiece… perhaps the best horror ever!”

Simone Bertozzi of ARCANA 13 comments: “Working with Enzo was the ultimate bucket list check off, being the horror movie fanatics we are! I tried to get in touch with him since day one with little hopes ’cause I wasn’t sure he could be interested in a musical project but as soon as we dug into details he totally freaked out. He basically took our guidelines that pictured a ballerina covered in blood and brought them to cult horror proportions. I once asked Enzo: <<How can you get such spine-chilling images out of the blue?>>, he answered: <<I never knew. They simply come to my mind as sudden flashes>>. He’s the master and made our nightmare come alive!”

DANZA MACABRA will be released on March 11th, 2016 by Aural Music and it also feature the cover version of Goblin’s acclaimed theme “Suspiria” from the terrific movie by Dario Argento. Tracklist is as follows: